Cryptologic Iron Man is an online slot game based on the famous Marvel character of the same name. The recent success of the Iron Man films has no doubt played a role in this online slot release. It is quite refreshing to find that this slot is more inspired by the comic book than the film. As such it features animated characters and animations.

Cryptologic Iron Man features 25 pay lines that players can activate. There is a maximum possible wager of 125, with the minimum wager required to activate a pay line starting at 0.01. This online slot has a unique bonus round where you must uncover secret blue prints as well as a wild symbol and a scatter symbol.  Iron Man is also part of the Marvel Hero progressive jackpot network.

Cryptologic Iron Man has a unique bonus game triggered by three of the game logo scatter symbols. In this bonus game you must destroy windows in order to uncover secret blue prints.

There are 9 windows of which you can destroy 5. Each window will reveal a cash prize but finding the blue prints will award up to 250x your staked wager.

This jackpot is divided into three possible pay outs. This jackpot is awarded randomly at any time, but the higher your placed wagers, the better your odds will be for winning the jackpot.

Tony Stark in his Iron Man suit is the Cryptologic Iron Man wild symbol. He can take on the value of any of the standard symbols as required in order to complete a winning combination. Lining up between 1 and 5 matching wilds on a pay line will award up to 6000 coins, the base game jackpot amount. 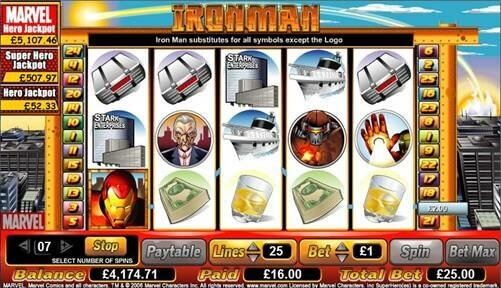 Cryptologic Iron Man features a scatter logo that not only triggers the unique bonus round, but also offers up 100 times your staked wager as pay out. You can land scatter symbols anywhere on the reels to win a cash prize. They do not need to be lined up on a pay line.

Cryptologic Iron Man features characters and elements from Tony Stark and Iron Man’s life. There are 10 standard symbols, starting in value with a glass of Whisky and a stack of cash. These two symbols pay between 5 and 100 coins to players. There is a set of blueprints and a locked briefcase, both of which have a maximum pay out of 125 coins.

In Cryptologic Iron Man the cruise ship and the Stark Industries building symbols are worth 15 to 200 coins, while Iron Man firing a beam is worth 500 coins at maximum pay out. The highest value standard symbols are the Crimson Dynamo, Iron Man’s nemesis and Tony Stark.

These two symbols offer pay outs starting at just two matching symbols on a pay line. Tony Stark is most valuable symbol, with a jackpot value of 2000 coins.