Every Wanted to Build Mad Crazy Castles and Get Paid? 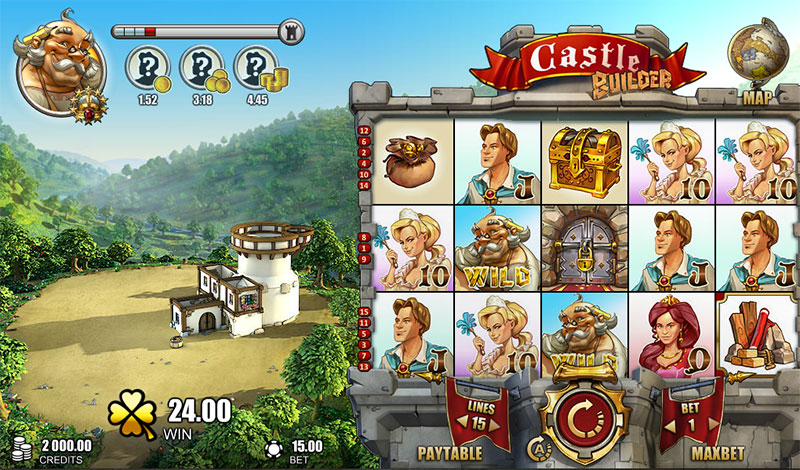 Castle Builder slot is an interactive online slot game that was developed by Rabcat. It tells the story of medieval kingdoms where kings marry their daughters off to suitors and house them in newly constructed castles that have been constructed by an old architect. The aim of the interactive bonus game is to construct castles on the left half of the screen by spinning the right symbols on the reels which are on the right side of the screen. There are five Castle Builder slot reels with three rows of symbols and fifteen pay lines. The pay lines are selectable but it is recommended that all pay lines be played in order to collect as many building material symbols as possible. Each pay line allows a bet of 0.01 up to 1.00 and only one coin is allowed per pay line. There is an auto play feature that plays a pre-set number of automatic spins. This feature speeds up the reels and assists in collecting the building materials faster for quicker real money NZ slots wins.

The main bonus feature of the Castle Builder slot game consists of landing building material symbols in order to construct a castle with the blocks awarded. Two, three, four or five building material symbols award standard blocks, bronze blocks, silver blocks or gold blocks respectively. The better and more blocks awarded means the higher the value of the castle on completion. As the blocks are collected they construct the castle on the left side of the screen. On completion of a castle the kings daughter will appear and pick between three suitors to find the one she will marry. A different prize is allocated to each suitor and is dependent on the value of the castle itself. The suitor’s worth is then awarded after a wedding takes place. The aim is then to continue constructing the next castle for the next marriage. There are ten castles that can be constructed over three different kingdoms.

The Wild Architect and Royal Symbols

The old architect responsible for construction of the castles is the Castle Builder slot game’s wild symbol. He is also responsible for assisting in forming winning combinations by acting as a substitute for any of the symbols. He will however never substitute for any of the building material symbols. The more valuable symbol are represented by the locked castle doors, the large golden treasure chest, a smaller jewellery chest and a bag of money. The most valuable of these symbols are the locked castle doors that award the Castle Builder slot game’s jackpot prize of 20 000 coins for five symbols appearing on a pay line. The treasure chests, jewellery chests and the bags of money each award up to 1 000 coins, 500 coins and 250 coins respectively. All of the symbols on the Castle Builder slot reels are themed including the standard playing card icons. These symbols are represented by the actual royal family themselves. The king, the queen, the prince and the princess represent the lower valued symbols on the reels and pay out for three to five matching on a pay line that has been bet on.