In the Hall of the Gods Riches Await! 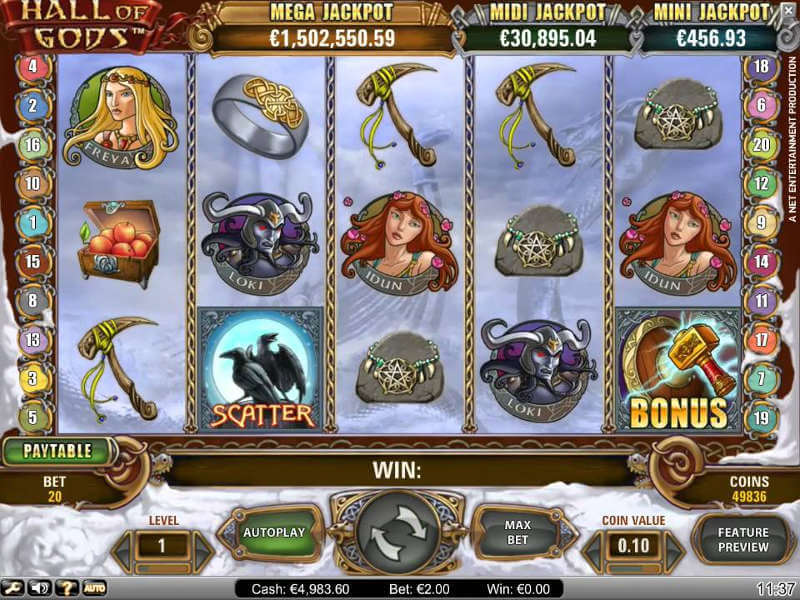 The game has been designed and developed by Net Entertainment (NetEnt), and features twenty pay lines, five reels, graphics of a high quality, scatter symbols, wild symbols, and Thor’s Hammer, the special bonus game that gives players the opportunity to win one of three large jackpots. The game is available for various devices running on Windows, Mac, and the Linux operating systems.

Hall of Gods is a video slots game that revolves around ancient mythology and, specifically, that associated with Viking history. The game itself is set on a Viking ship, and the theme and all elements thereof are true to the Viking theme.

The Hall of Gods Bonus Feature

Thor’s Hammer is both the bonus symbol and the name of the bonus game. When players land three Thor’s Hammer symbols, the bonus game will automatically be activated. Here, players will need to use the hammer to crack shields, revealing an array of prizes. If players match three paper scrolls, all of which are printed with the same coin amount or matching jackpot jewel symbols, they will be able to access the higher payouts and jackpot games.

The Hall of Gods Theme

The theme of Hall of Gods, as mentioned, revolves around ancient mythology, and centres on Viking, or Norse, mythology. This is evident through the graphics in the background, the symbols, and the music and sound effects associated with the game. Drums can be heard as the main background track, building up excitement and dying down again as the game continues and winning combinations are landed.

The Hall of Gods Scatter Symbol

The Hall of Gods Wild Symbol