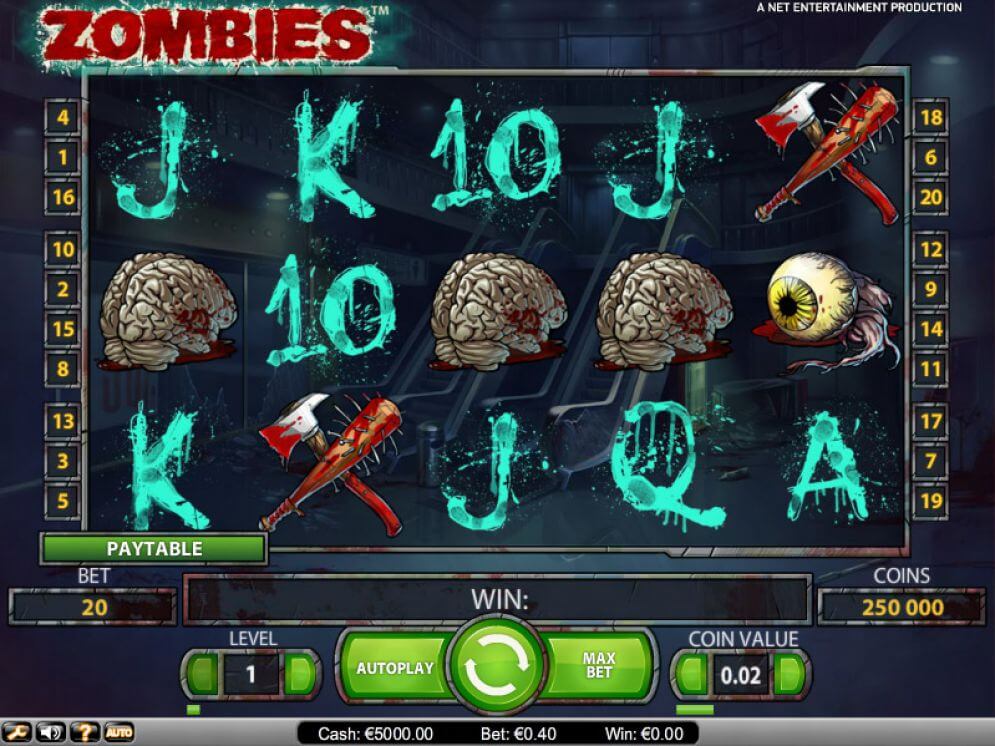 Ah Zombies. How they have crept into modern culture. You can find TV shows about them, movies featuring them and even slot games based around them. Children dress up as zombies for dress up parties and Halloween.

The Pentagon, which is the United States’ primary military facility, even has a contingency plan in place in the event of a Zombie Apocalypse. That is reality, not fiction at all. NetEnt has jumped on the flesh eating bandwagon and released the popular slot, Zombies. This slot is a five reel twenty payline slot that is a bit lacking in the special features department, but makes up for it with great graphics. The wager range is a nice 0.01 up to 0.50 coins per spin, and it has a decent standing jackpot of 1000 coins

The main features of this slot are the wilds. There are three kinds of them, the regular, the stacked and the random. The regular wilds appear on reels one, two, four and five and like most other slots they replace other symbols in the game except for the scatters.

The random wilds are a bit more exciting. In this two zombies heads will appear on the reels, and a gun will shoot up to six times. A new wild symbol will take the place of the shot one, meaning that you can get up to six wilds. The stacked wild only appears on the middle reel. This comes in the form of a large and gory zombie. If only a part of him shows up on the reels, then that part will be moved either up or down until the full zombie is revealed in all his gory glory. He will then end up covering the whole reel when it completes a winning line. This is only available in the base game however, as is the random wild feature.

The theme to this slot is quite clearly one of flesh eating dead people lumbering around in search of brains. It is quite oddly set in an empty shopping mall however. This is a dark slot, definitely not one for a person with a delicate constitution. The graphics are superb, the only let down being the deck of cards symbols that have been done up in a kind of electric turquoise, but even so they don’t really fit in.

The rest of the symbols are theme based, many of them being weapons to help you to survive in this new post apocalyptic world where dead people run amok. On the reels you can find things like extracted eyeballs, vials of green stuff, circular saws, gas masks and the ever present zombie food; brains. The back ground to the reels is black, as are the reels themselves, which does make the acid green buttons at the bottom of the screen stand out in stark relief. The sound track is great too, with unexpected noses making your skin crawl and your hair stand up.

The final feature at https://casinositescanada.net/slots/  is the free spins feature that is launched by finding three scatter symbols on reels two, three and four. This will give you five free spins. The bonus round starts with a screen full of a random number of zombies that get shot automatically, awarding you cash prizes. During this free spins round there is also a multiplier in play. This multiplier increases with your number of free sins, going up to 10x for the final free spin, which could award the games highest payout of 100 000 coins.