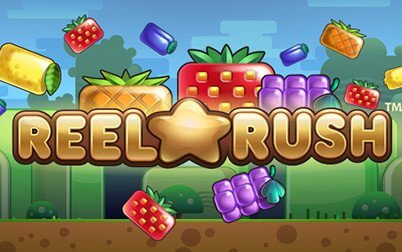 A video mobile slot with a number of bonus features, Reel Rush Touch from NetEnt has a theme that pays homage to one of the most influential video games of all time. While it doesn’t feature the famous Italian plumber characters, the design is still instantly recognisable.

The slot has five reels and 45 ways to win in the base game. However, the number of ways to win increases during re-spins to as many as 3125.

Other bonus features found in the game include a Wild symbol and a free spins round. It is compatible with Android, iOS, Windows, and BlackBerry smartphones and tablets.

Australian bookmakers can play Reel Rush Touch instantly in an online casino browser. No downloads are required for this, but players would need to ensure that their device has sufficient data or a reliable enough internet connection.

The game can also be played on Android or iOS devices by downloading the relevant app.

After launching the game, a swipe on the main screen will open up the betting options, which can be adjusted.

As there are no traditional paylines in the game, there is no option for selecting paylines. Once the betting options have been adjusted, players can swipe back to the main screen and commence spinning the reels.

Symbols can form winning combinations by appearing on adjacent reels.

The bronze star Wild symbol only appears on the second, third, fourth, and fifth reels of Reel Rush Touch mobile slot. The Wild can substitute for all the reel symbols.

It will only substitute for symbols if it can help complete a paying combination, and when that happens, it pays out the highest amount for that combination.

The symbols on the reels of Reel Rush Touch mobile slot are a combination of higher value stylised fruit, and an assortment of coloured discs that may or may not be boiled sweets. The Wild takes on a slightly different form.

The higher value symbols include a strawberry, a pineapple, a lemon, a watermelon, a grape, and a plum. The lozenges are purple, orange, red, and other colours.

The Wild is a bronze star and the word Wild. Some spaces on the reels are coloured blue, and marked with stars and the letter R. Those spaces become active as the ways to win increase during the re-spins.

The Reel Rush Touch re-spins are activated automatically after every spin that lands a winning combination. While the base game is played with 13 spaces and 45 ways to win, the first re-spin will see more positions open, which increases the number of ways to win to 135.

A fifth re-spin also triggers the free spins round. The round sees eight free spins awarded, and all spaces on the reels made available, which increases the number of ways to win to 3125.