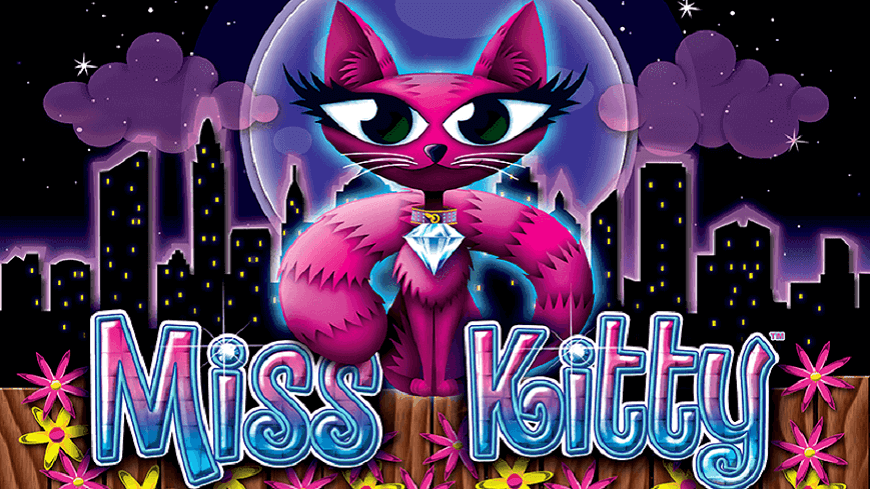 Miss Kitty is a slot game created by Aristocrat Games, known mostly for its incredibly cute main character. Miss Kitty is a fluffy pink cat, sporting abnormally huge eyes and what appears to be a large diamond around her neck. She certainly seems to be a well off feline, but you wouldn’t know it looking at her uninterested face. The graphics in Miss Kitty are fairly good, although perhaps not as finely detailed or realistic as some other games.

In Miss Kitty, however, the visual style is all about cartoon-ish charm, and although the images are not jumping out the screen with detail, they do a great job of presenting this mischievous pussy car. In terms of game play Miss Kitty uses a five reel, fifty play line system, which is a good deal more play lines then similar river belle casino games. This means that player is granted an extraordinary amount of freedom, leaving them to tweak the play style until it suits them exactly. Keep in mind, however, that the more betting lines opened the more money will be required per opening bet.

Miss Kitty seems to be in a world of luxury, represented by the many feline friendly game symbols. The most valuable of the symbols is a goldfish, who has a rather alarmed look on his face. Clearly the little fish is aware that he is nothing more then a Kitty snack. The goldfish will payout a good amount if matched the maximum of five times, and may be matched a minimum of two times, although this is a rather meagre payout.

The next most valuable symbols in the game are an equally startled looking bird, also a Kitty snack, and a windup mouse. These symbols are of medium value, and may also be matched five, four, three, and two times. Next we have a carton of milk and a ball of yarn, comfort items for the fussy feline. Both items are of lower value, but will still be welcome on the reels. The remaining symbols are the nine, ten, jack, queen, king and ace of playing cards, which are not feline themed in any way, but still worth cash to the player.

Miss Kitty herself acts as the wild symbol, and will quickly prove to be a valuable ally to the player. She will match with any other symbol to create winning sequences, which is certainly nothing to sneeze at. She may also match with herself up to five times for a huge payout. The scatter symbol in the game is the moon, which seems to suggest Miss Kitty is a nocturnal animal. If the moon matches five times the player is granted ten free spins, which will play out immediately. During the free spins, if Miss Kitty makes an appearance she will stick in that position on the reels, providing wild symbol bonuses throughout the remain free spins. As can be seen, Miss Kitty is the player’s best friend, regardless of the fact that she seems unable to express affection.