Review of A While on the Nile Slot Online 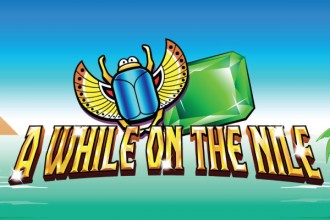 Most of the online video slot titles focused on the treasures of ancient Egypt are fairly staid and stately, with a serious or even mystical tone underlying the fabulous riches on display. NextGen’s A While on the Nile slot avoids this approach completely, mainly through amusing and irreverent artwork. It is still beautifully illustrated: the five reels in a gold frame studded with rubies hang between gaily-decorated palace pillars inscribed with colourful hieroglyphics. In the background, the Nile flows past the pyramids in a view framed by palms, with the occasional sailboat passing by.

Yet despite the bright colours and breath-taking details, A While on the Nile slot weaves some quirky comic touches into the artwork. The hieroglyphic panel among the high-value symbols, for example, pictures the god Anubis winning on an ancient Egyptian slot machine. The Pharaoh Wild seems more like a beefy jock who forgot to take off his eyeliner after a turnabout party, and while Cleopatra looks charming, she frankly looks stoned out of her gourd as well.

It may look goofy, but A While on the Nile slot can still deliver some substantial prizes. It has NextGen’s SuperBet feature; by increasing the number of coins per spin, the player can add one of five multiplier levels to any wins that feature the Wild, up to X10. It can be expensive, though: all 50 paylines are fixed, so the player must bet at least 50 coins per spin. Coin denominations can be adjusted according to the budget, however, from 0.02 to 0.40.

To engage the first level of SuperBet, a X2 multiplier, players must bet an extra 50 coins per spin. To play with a X10 multiplier requires a total bet of 350 coins per spin. Despite the extra expense, the rewards in enhanced prizes can make the SuperBet worthwhile, so many players will lower the coin denomination to be able to play at the top SuperBet level.

The musclebound Pharaoh, bearing his magical emerald, is A While on the Nile slot’s Wild. Substituting for any payline symbols, he can only appear on Reels 2, 3 or 4, but he can appear stacked over two, three or all four reel windows, making multiple simultaneous wins possible.

There are two bonus icons the Pharaoh cannot stand in for: a Scarab and an Emerald. Both are Scatters, although the Emerald only appears on Reels 2, 3 and 4. Three matches pay a prize of 2X the spin bet on 50 paylines, excluding the SuperBet. Three Emeralds also trigger a round of 5 free games, with extra stackable Wilds added to the reels like you get free bets at mobile sports betting websites.

The Scarab occurs only on Reels 1, 3 and 5, and it is also a Scatter. Three Scarabs activate the Scarab Bonus Feature. Players must pick from the Scarabs onscreen to reveal the prizes they conceal. When the word Collect is revealed, the round ends.

Angular, brightly enamelled gold letters studded with emeralds form A While on the Nile slot’s five card-deck symbols, the A, K, Q, J and 10. As already mentioned, the themed symbols look a lot less formal than usual. These include the Pharaoh’s crook of office, the Anubis panel, a gold pendant fashioned as the Eye of Horus, and giggly Cleopatra. She has the biggest potential payline prize, winning 1,000 coins for five of a kind.