The Secret Code slot game, created by Net Entertainment, is an online casino game available for play on desktop computer and mobile phone. The game is most well known for being based around rather mysterious and intriguing theme, namely an ancient conspiracy. Through the course of the game the player must attempt to decipher the secret code, and unlock the truth. Or at least, the player must do so as much as they can within the confines of an online slot game.

In terms of graphics the Secret Code in not on par with some of Net Entertainments other games, but is still well done enough to offer an interesting game experience. The music and sounds of the game are also not up to Net Entertainment’s usual high standards, but enough is done to create an extremely mysterious atmosphere. In terms of game play a five reel, twenty pay line system is used, with the option given to the player to bet only on the lines they prefer. This, of course, provides a deeper slot game experience with a number of opportunities to maximise wins and minimise losses.

The most valuable symbol in the Secret Code game is a distinguished looking gentleman gazing at a piece of parchment. This man can be assumed to the code breaker, and he is worth a great deal of money if matching with himself the maximum of five times. Following him, in terms of value, is a lady code breaker, who appears to be examining a mysterious green stone.

After the two main characters comes an old book, an hourglass, and a number of coloured rings and interesting stones. The least valuable symbol is the blue stone, which gives only a very small payout, even if matched the maximum of five times. In order to really take advantage, however, players of the secret code must pay attention to the bonus special features. 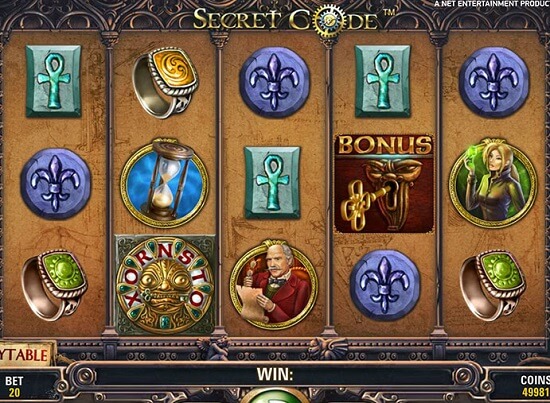 The first bonus feature in the Secret Code is the wild symbol, represented by a knife wielding man in a monk’s robe. Upon being matched this man will plunge his knife into a stone pedestal, which will open a secret doorway. He will also expand to cover an entire reel, granting matches for the entire row. This can, of course, be a very valuable occurrence.

The next bonus feature is the scatter symbol, represented by a golden amulet of impressively detailed design. This symbol must match regardless of where it appears on the reels, and will grant an instant number of free spins.

The last bonus feature is the bonus symbol, which is where the real money in the game lies. Represented by a key in a lock, if this symbol is matched three times it will trigger a mini-game. In the mini-game the player must match keys with chests, all five of which are being held by masked figures. Upon a match being made the mask will crumble, revealing either a human, which grants a payout, or a sinister reptilian creature. It must be said that it is rather startling when first seeing the reptilian monsters, which are rather out of place in the game.