The word Petits-Chevaux is a French word that translated means ‘little horses’. This is a gambling game that used to be quite popular and is played with a mechanical device which consists of a board perforated with a number of concentric circular slits. In each of these slits, each independently on its own axis, revolve little figures of jockeys on horseback. They are distinguishable by the different colours and numbers that they wear.

Players can stake their wagers according to their choice on a board next to the mechanical device, which is marked in divisions for that purpose. The little horses are started, and they revolve rapidly together by means of the mechanism attached to the board. The horse which stops nearest to a marked goal is the one that wins, and every player who has placed his stake on that horse will receive so many times his stake. Sometimes on the board, figures of railway trains and other objects can take the place of the figures of horses, although the horse formed the basics of the game.

Petits-Chevaux Being Replaced By Boule

In recent years there has been an inclination to supplant the Petits-Chevaux at some French resorts with the game of boule, or ball game, played on the same principle. This game involves a ball being rolled on a basin shaped table, so that it can settle in one of a number of shallow cup-s, each of which is marked with a figure. Wagers are placed in the same way as in Petits-Chevaux. 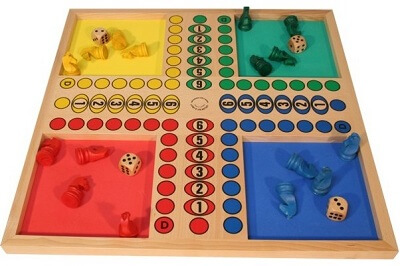 The Story of a Petits-Chevaux Addict

One of the short stories by Saki, published in 1911, called The Way to the Dairy, is all about the effects of gambling on a family, and the gambling medium the bad boy in the story chose was Petits-Chevaux. The family followed the gambler to the quiet French resort of Pourville, and to the casino mthat was attached to the hotel. The family entered the casino where the game of Petits-Chevaux was in progress. The old aunt, who was following her gambling nephew, ended up also putting money on the little horses. She watched the little horses going round and round, and was thrilled when number eight, the number she had bet on, actually did win. The old aunt, to the consternation of her family, also became a Petits-Chevaux addict, and could not be prised away from the tables.

A very similar game is Parcheesi, an American adaptation of the Indian cross and circle board game, which was created in India as early as AD 500, and was played originally on large outdoor boards. This game and its variants are known worldwide. Spain also has a version of the game called Parchis, and Parques is the variant played in top British Colombia online casino. A similar game is available in the United Kingdom under the name of ludo. This game is not played by moving horses like Petits-chevaux, but is played with two dice and four pawns per player, although the board with a track round the outside and four home paths does resemble the Petits-chevaux board.

Petits-Chevaux has been played in many small casinos in France since the early nineteenth century.