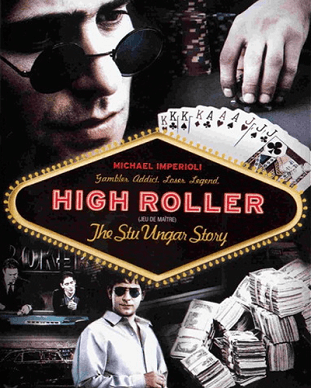 The film High Roller: The Stu Ungar Story stars Michael Imperioli, and, using flashbacks relates the story of his life, ostensibly while he is relating his life’s story to a stranger in his hotel room on the last night of his life. The movie is rich with dramatic irony, because everyone knows how the plot ends, and that Stu Ungars life ended tragically in that hotel room in 1998.

The film itself won numerous awards. It was given the Nashville Film Festival Audience Choice Award in 2003, the PRISM Awards Commendation in 2004, and the San Diego Film Festival Award for Best Director in 2003, but neither true poker aficionados nor real fans of Stu Ungar were overly impressed with the production. Stuey, as he was apparently affectionately known by his friends showed his talent for card play very early on in life. His father was a bookie for the mob, and from an early stage the local mob boss recognised the talent that the youngster had and began funding and supporting him. After his fathers’ death of a heart attack, a local mob boss became his mentor and protector.

High Roller: The Stu Ungar Story was written and directed by A.W. Vidmer, who focusses the film more on Stu Ungar’s personality and his relationships that on the cards, the general gambling problems and the drug addictions he suffered. Stu may have been a genius and the cards, but his love of betting did not translate to success with horse racing and sports betting. His real skill was gin rummy, and he often had to enter gin rummy or poker tournaments to win back money he owed from is other betting activities. Stu Ungar was a mentally gifted card player who had a natural ability to count and remember cards. He was also an arrogant player and a natural show-off which alienated him from many people, destroyed any semblance of family life and made the drug addiction worse.

Poker Play in the Movies

Stu Unger’s’ famous retort to be called a good loser was that it was the worst thing one could be called and that a good loser was simply a loser did nothing to win friends and influence people. This also affected his card-playing exploits in Las Vegas, and he was banned from gin rummy tournaments because nobody would enter if he was playing.

He was entered in the World Series of Canadian Gambling Event in 1980, and became the youngest ever winner, earning the nickname of the ‘kid’. He returned to win the following year, only the second time this feat was ever achieved. After many years of drug abuse and problems, he was sponsored a seat at the 1997 World Series of Poker Main Event. Despite struggling on day one after a long drug binge, he returned on the second day and went on to win the tournament again. He is only the second person ever to have won three WSOP Main Events and has a permanent place in their hall of Fame.

In High Roller: The Stu Ungar Story, he finishes telling his story to the stranger, and then leaves the room with him. The stranger was the Grim Reaper.